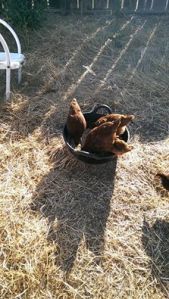 I started a blog before this one, on raising chickens, went to get a pic, lost it, and am starting over. This seems to be a recurring event in my life lately, the screw up and have to start over part. Does that make anyone feel better, right at the gitgo?

At any rate, in early April I went online and entered “raising chickens.” Tractor Supply had the best info, although I don’t think chickens drive or live in tractors. I like Tractor Supply, had seen chickens there before, and made a deal with my husband to buy me this really cool red barn chicken house for my birthday. We went and bought a dozen baby Rhode Island red hens. They lay brown eggs prodigiously and are dang cute, baby or grownup. Go girls! We also bought chick starter, pine shavings and borrowed back my feed bin and waterer from my sister who had moved to the country a few years before. I had had chickens about fifteen years ago, but let it go by because I was working out of town. Too much of everything, another pattern in my life. However, now that I’ve retired from the out of town job, I’m simplifying. God told me I need to cool it until the dark circles under my eyes hit the road. But I digress.

When we got home, the fam came over and the ever-helpful grandsons cleaned out an old horse trough that was used by a goat who moved to Patterson (but that’s another story). We put in the shavings, filled the waterer and feeder and watched the chicks populate their new home. I don’t know if it happens to everyone, but with each little golden fluff ball I gently placed in the shavings I knew more exquisitely that I was again becoming a mother. They lived in the garage because it’s still pretty nippy in April. We turned a light on them if they all bunched up to show they were cold and turned it off when they were hanging out around the edges of the trough because they were too warm. I had to water them morning and night because 12 chicks drink a lot of water. I also had to clean out their feeder, which quickly became dumping out the shavings, poop and leftover feed into the flower beds in my front yard. Boy is that great fertilizer! On Saturdays I cleaned out all the pine shavings and etc., hit the flower beds again, and filled the trough with clean pine shavings.  It was about two months before they outgrew the trough, and a different grandson and my husband helped me build the chicken house out in the way back part of my backyard.

I also bought phony eggs and put straw in the hutch to show the girls where they were supposed to put eggs when they get around to it. Again fam came and helped me. I picked up a little hen, clipped her right wing (so she won’t take a powder over the fence) and they ferried them through the gate to the new chicken house, twelve times. We did it late in the day so they could stay in their new home and get settled. the first day they came out when I opened the door and all went to the new, bigger feeder. You can see the pic of them with their little red chicken butts in the air and their beaks in the feed up at the top of the page. They stayed pretty close to the house that day, but it wasn’t long until they were checking out the whole enclosure, pecking around in the straw looking for whatever. I bring them vegetable and fruit scraps from the house now and then, so they think I’m queen of the world.We put the horse trough upside down, so I began to sit on it and talk to them. My husband says that makes me a chicken whisperer. I watch their behavior with each other, too. There definitely is pecking order, and it’s a crackup when one squawks and high tails it, wings up, across their free range and the rest follow her doing the same thing.

There is an interesting issue with chickens who are all the same kind. You can’t tell them apart, or so I thought. Actually one of the “girls” comes rushing up to me first when I go out to open their door and get their day started in the morning (you close the door at night to avoid predators ruining the whole picture). Her name is Friendly. Now somebody asked me how I know it’s her, and I replied, “If she comes first, she’s Friendly.” Then there’s Dolly, who has  a really big chest. Stupid can’t find the door of the chicken house when it’s time to go in at night, even though she’s walked through it a bunch of times before. Wait that should be Ping according to my friend Pauline. Stupid isn’t a nice thing to call a chicken and Ping was some duck or something who was stupid, in a book y’know. I was going to name one Buzzard when her comb started turning red, but then they all started turning red, so never mind. One is Runt, and she has persisted at being the littlest, so she’s easy to spot. As you can see, I have a few names to go, but they’ll come to me.

We went to Tractor Supply to get them layer mash and oyster shell just the other day because they are getting ever closer to being egg producers. Now there are only two people at my house, and there are 12 hens. A hen lays an egg every day, if she’s worth her oyster shell. That’s lots more eggs than we can eat. So I guess I’ll become the family and neighborhood egg lady, or maybe chicken whisperer has more mystery to it.